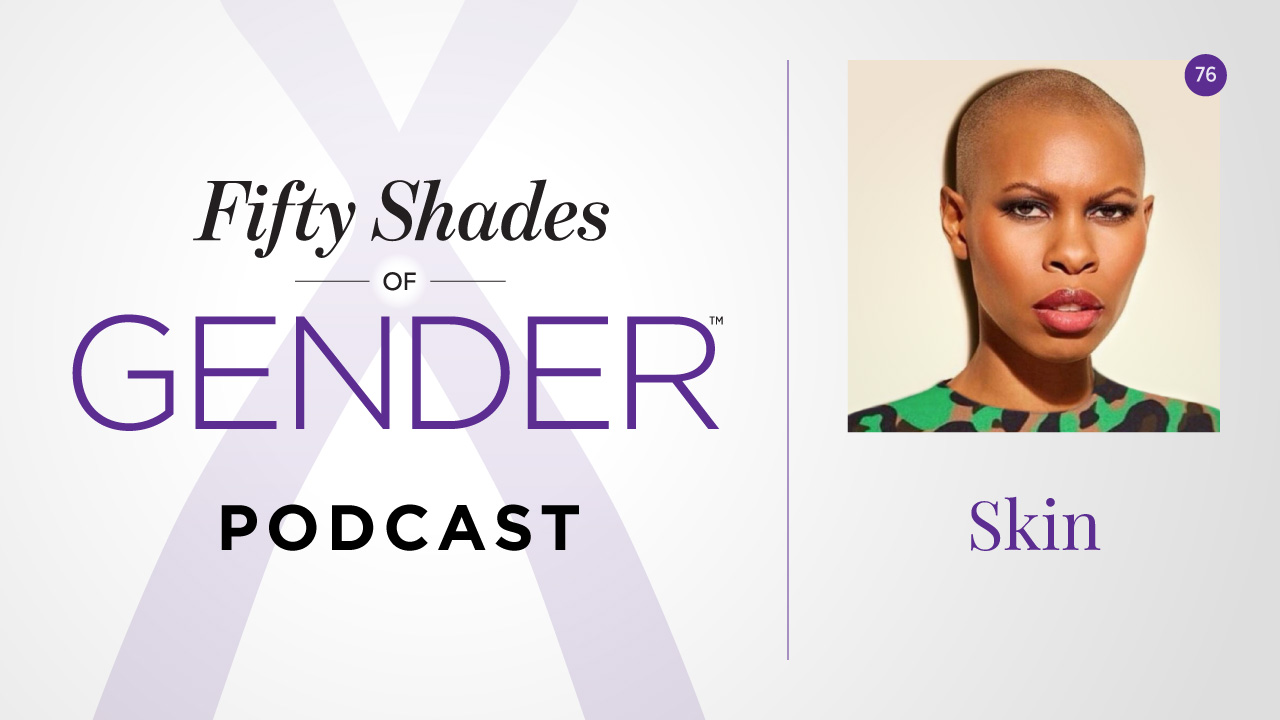 A conversation with Skin

Skin’s pronouns are she/her, and she is a queer person. Find out what that means to Skin in this episode.

We also talk about stepping stones to new language, the obsession with beauty in the gay community, breaking gender roles, given names and designing your own sense of self, a cultural sense of identity, expanding on feminism, marriage and motherhood, chosen family and learning how to love each other, staying open and giving people a chance to change their minds, and how we need to join forces and stop fighting each other.

“It wasn’t until I shaved my hair off that I found my face…I remember looking in the mirror afterwards and going ‘there you are! There’s the person I’ve been trying to find.'”

Skin, the trail-blazing lead singer of multi-million-selling rock band Skunk Anansie, is a global female icon. As an incendiary live performer, she shatters preconceptions about race and gender. As an activist and inspirational role model she has been smashing through stereotypes for over twenty-five years. With her striking visual image and savagely poetic songs, Skin has been a ground-breaking influence both with Skunk Anansie and as a solo artist.

From her difficult childhood growing up in Brixton to forming Skunk Anansie in the sweat-drenched backrooms of London’s pubs in the ‘90s, from the highs of headlining Glastonbury to the toll her solo career took on her personal life, Skin’s life has been extraordinary. She talks powerfully about her work as social and cultural activist, championing LGBTQ+ rights at a time when few artists were out and gay. Told with honesty and passion, this is the story of how a black, working-class girl with a vision fought poverty and prejudice to write songs, produce and front her own band, and become one of the most influential women in British rock. In 2021, Skin was awarded an OBE for services to the music industry in the Queen’s Birthday Honours List and appointed Chancellor of Leeds Arts University.

Skin has her own radio show called The Skin Show on Absolute Radio, in which she plays the songs which have sound-tracked her life as well as the new music she’s listening to. Sharing stories from years of touring, working in the music industry and beyond, the show promises to offer music fans a unique and personal insight into the life one of British rock music’s most influential figures.

Her podcast is called Skin Tings, where she has conversations with famous friends, musical heroes and the most exciting up and coming talent. Listen in as Skin and a special guest each week relive past experiences, swap stories from on and off tour and look ahead to new music.

Skin’s 2021 book, It Takes Blood and Guts, is co-written with music journalist, biographer and broadcaster Lucy O’Brien, who has written for Q, Mojo, Sunday Times and the Guardian. It is published by Simon & Schuster.

It Takes Blood and Guts by Skin & Lucy O’Brien

GO TO THE PODCAST PAGE
Categories: PODCAST, QueerMarch 17, 2022
SUPPORT US