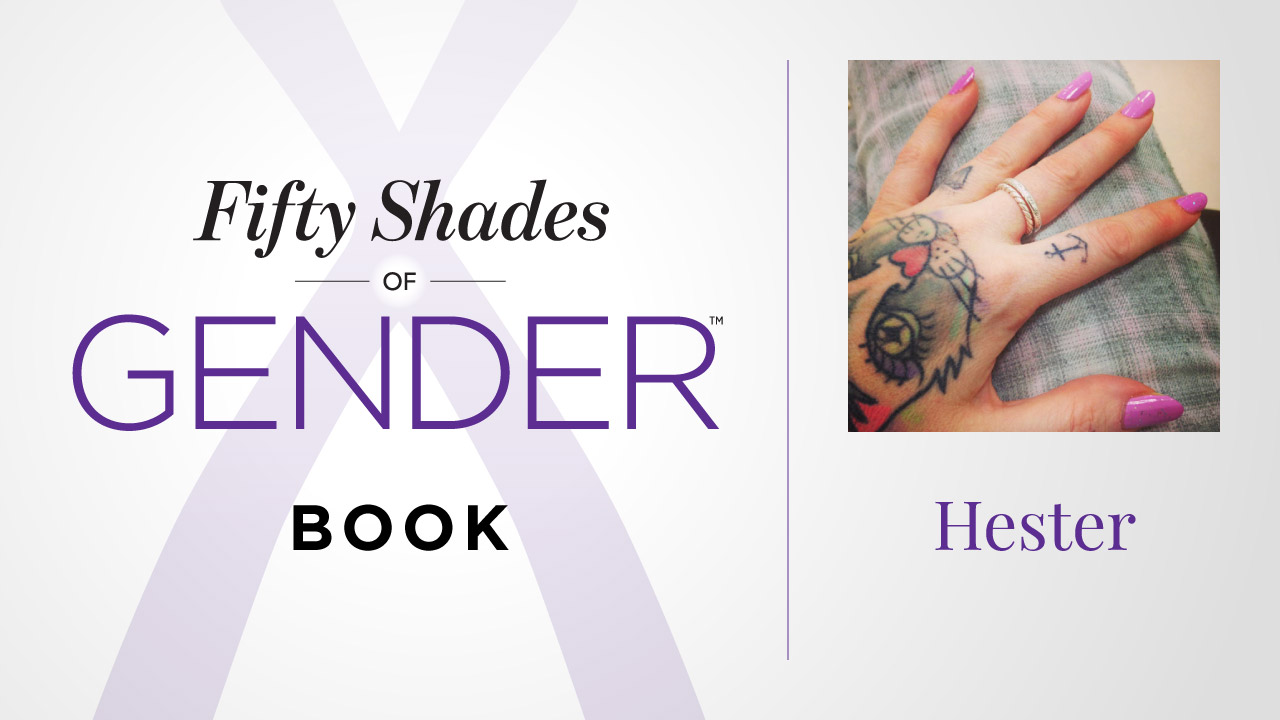 A conversation with Hester

Hester’s pronouns are she/her, and she identifies as non-binary and an agender woman.

How do you identify, and what does that mean to you?

I identify as non-binary, and an agender woman. Even though those last two labels might not seem to go together, they are definitely closest to how I feel. I have thought about whether it is more ‘correct’ to say I am an agender female, because that is my biological sex. I was born into and live with a female body, but that is a word that I just don’t like to associate with myself. It makes me think of pregnancy, breastfeeding, and periods, and when I think about these things in relation to myself, I feel uncomfortable, I’d even say distressed.

I am very lucky that I don’t feel dysphoria about my body’s outward appearance. I like it, and I don’t want to permanently change it. I like my female body being there, though I don’t like when it does female things! I take contraception that has halted my periods, and I am not interested in reproducing or rearing children, in any way.

“For me outward appearances and how society genders me are not so much my concern. How I identify inside, within my soul, and how this affects me and makes me feel is more important to me.”

It has been quite difficult to figure out why ‘woman’ sits better for me, despite identifying as agender, but I think it might be to do with that having been my social identity for a couple of decades now, and perhaps a part I play well, so I don’t mind keeping it. I also see it as easier to navigate every day life and society with that label. I think I’d like to be thought of as simply a person even more, but being seen by others as a woman is not something that affects me negatively. For me outward appearances and how society genders me are not so much my concern. How I identify inside, within my soul, and how this affects me and makes me feel is more important to me.

This is the part of me that truly identifies as agender, which I define personally as having no gender whatsoever. I do not feel a connection to either binary gender, and I never have.

I grew up a tomboy in the 1980s, climbing trees and collecting insects and frogs. I hated girl’s clothes when I was young and all the things girls seemed to be interested in. Most of the people I spent time with were boys. I never felt I wanted to actually be a boy, though. I didn’t really understand either group. They both seemed like different species to me, but I just thought I was a strange person, who didn’t fit in anywhere: an impression that has shaped my life drastically over the years.

From the point of view of how I present myself, I would say I have an androgynous, or gender neutral, appearance.  I like to look my best, in order to feel socially confident. I think I look best with my hair long, wearing make-up and jewellery, and making my face look pretty, but I  wear gender neutral clothes like urban sportswear, jeans and T-shirts. I don’t wear bras, preferring simple crop tops. I do like dresses, but they are always quirky or sporty and not feminine, or teamed up with big boots! I can’t stand anything that is uncomfortable or inconvenient, such as heels, or long nails. I’m also covered from throat to ankle with hours and hours of tattoo art, which is actually the part of my appearance that gets the most attention for going against gender norms.

Does the term ‘dysphoric’ resonate with you?

As I mentioned earlier, I feel lucky that I don’t feel much dysphoria about my body, other than some biological aspects which I am thankfully able to avoid. The way those aspects make me feel can only be described as a kind of disgust that goes right to my core. I can’t even stand other people talking about feminine body-related subjects really – the sense of alienation I feel is immense.

“Not feeling body dysphoria did actually make things more complicated for me in some ways, because it was the veil that prevented me from realising my true gender identity for a very long time.”

Not feeling body dysphoria did actually make things more complicated for me in some ways, because it was the veil that prevented me from realising my true gender identity for a very long time. I was 37 when it finally clicked that I was agender (what a wonderful feeling that was!). I had been feeling and living that way all my life, but I had never realised it had a name, and there were others out there who felt like me too. I had never thought that trans and related issues applied to me,  because I was okay with my body. Despite seeing myself as a pretty liberal person, I knew very little about non-binary identities and experiences.

More recently, with celebrities and people in the news speaking more about these things, I started to look into non-binary more, and played with the idea that perhaps I was both a boy and a girl, perhaps gender fluid. I thought about this and lived with it for a year or so but it just didn’t seem quite right, and that was when I started to realise that actually, I didn’t identify internally with any gender.

It is perhaps the most wonderful thing I have discovered about myself. It seems cliché, but everything suddenly seemed to click into place and make sense – how I behaved as a youngster, the mental health challenges I’ve had all these years, the androgynous way I’ve always dressed and liked to look, the people I surround myself with, why I’ve never felt like I belonged, or fitted in, or ‘got it’. Now I have so much more confidence in myself and I just feel so much more at ease within myself.

It’s like it’s given me permission to be the quirky, ‘weird’ and nonconforming person I’ve been all along. I can stop blaming myself for who I am now, and accept myself.

What do you understand gender to be? What does it mean to you?

I studied gender theory as part of my sociology degree, and I agree with those theories that see gender as a social construction and separate from biological sex. There is a huge variation in historical and cultural gender identities, and in what constitutes masculinity and femininity, which goes against the idea of there being universal differences between males and females.

To me, gender is yet another social construct in which people are persuaded to fit within neat boxes. I have never fitted into social boxes very easily, and I resent the fact that you are encouraged from birth to be a certain way in our society. If you do not conform, you are at risk of being outcast through ridicule, discrimination and abuse. This is something I dislike about society, and yet my identity is largely constructed by my going against the grain, so in a way, it serves a purpose! I enjoy being unconventional, and that makes me who I am.

My non-binary gender is just another descriptor of me. It doesn’t hugely define me. It is more important for me and my self-concept than as an outward-facing identity.

Anything else to add?

“…it is interesting to note that the terms non-binary and agender both actually frame what I am NOT rather than what I AM. I know I am not the binary, but what am I?”

I think it is interesting to note that the terms non-binary and agender both actually frame what I am NOT rather than what I AM. I know I am not the binary, but what am I? This is a question I have thought about a lot. It is not that I need a label, or a word or term to use externally. I have those things already. I’d just like a concept, for myself, internally. I still feel it is that missing piece that is just eluding my grasp.

The idea of having a unique gender that I create myself has been suggested, and it sounds interesting, but it feels like trying to think of a colour that hasn’t been invented yet. How can you think outside concepts that are so enduring?

I try to think about the things I am: I am creative, I am musical, I am spiritual. To me, these are all aspects of me that are not in any way social constructs – they exist outside of that, and are almost otherworldly. And so perhaps this is how I’ll define myself for now – a creative, musical, spiritual being, in human form. That seems to feel right, for now at least. Though I am open to the way I feel evolving as time goes on, especially as I am right at the start of my journey of being consciously non-binary.

I am 38 years old. There are countless aspects to my identity, which I see as fluid in many ways, and constantly evolving.

I like to write, and I am currently writing a series of self-help books about mental health. I also write lots of other pieces on mental health, gender, identity and various other interests of mine, and enjoy collaborating with others. I write electronic music, I sing, and I am a vegan Druid!

I create under various pseudonyms, for a lot of reasons. I am not out and open about my gender to those who know me as me, though I think that if someone ever asks, I will answer truthfully. I have had light conversations about gender with close friends, and they are quite open-minded, so I know they would attempt to understand, and accept, anything I told them. My partner knows and is very understanding. Sharing with my family is another thing altogether, and I’m still quite undecided about that, and how important that really is to me.

I would like to get more involved in the non-binary world, through my writing, groups, meeting others, and perhaps some quiet activism, so people around me might start to connect the dots after a while, but I’ll just take that as it comes.

Get in touch and volunteer to be interviewed, or sign up to hear about new stories being published.