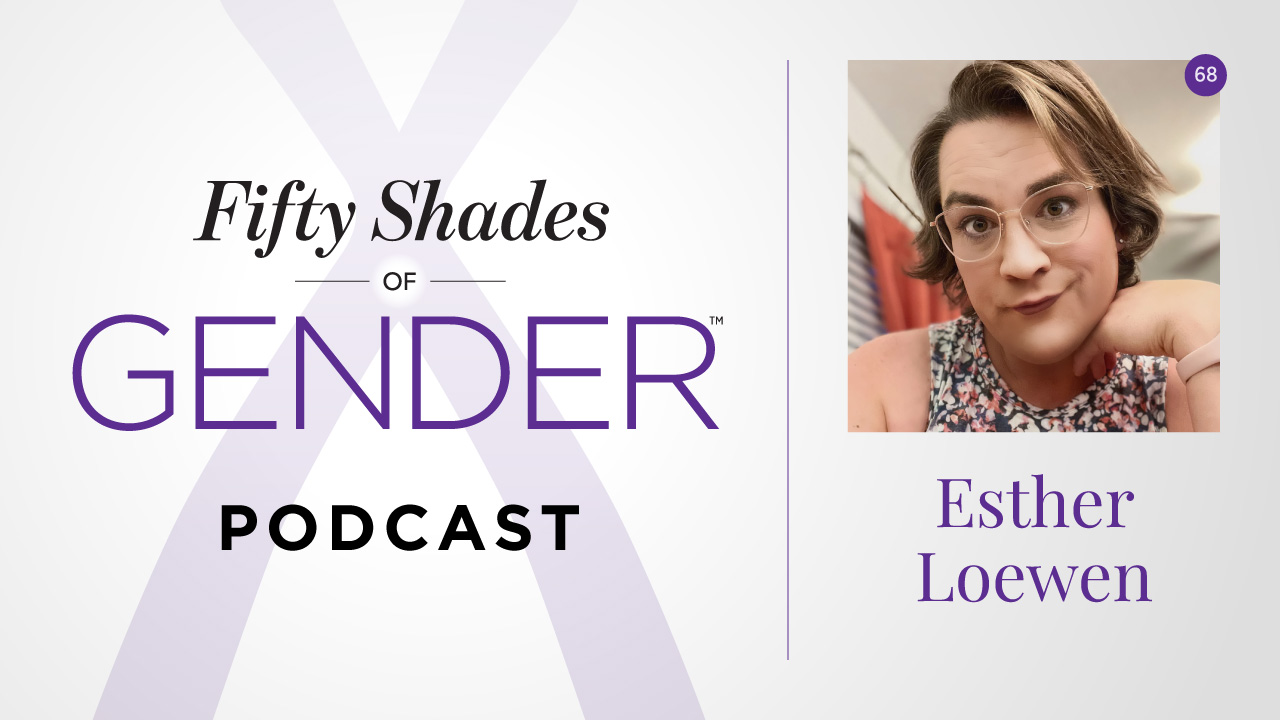 A conversation with Esther Loewen

Esther’s pronouns are she/her, and she is a transgender woman. She also identifies as a parent, spouse, pastor, professional includer, and queer. Find out what that means to Esther in this episode.

We also talk about how coming out is an ongoing process, questions to ask yourself on the gender journey, finding hope in spirituality after trauma, grieving the loss of vocation, taking a leap of faith, embracing how god made us, integrating and honouring the old self, and entering the next chapter in life with dignity and grace.

Esther grew up in rural Washington State in a little town called Walla Walla. It’s known for wine today, but when Esther was a little girl, onions and the state penitentiary were her hometown’s main calling cards. She was raised part of the Seventh-day Adventist denomination, a conservative but diverse brand of Christianity that is marked by it’s very tight community structure, dogged adherence to counter culture religious practices, and established school and medical system networks.

Esther knew she was different from other kids in her family and school when she was as young as eight. But the rigid subculture of her youth did not allow for gender transgression without significant consequences. Already having gone through the trauma of her parents’ divorce, Dad’s absence due to addiction, an abusive stepfather, and repeated abandonment, she felt far too vulnerable to risk expressing her true gender. Later trauma experienced through the loss of her brother in a house fire only gilded her commitment to avoiding risk taking. Instead of being honest about the things she was feeling, she systematically suppressed, repressed, denied, and hid them — even after she became a pastor. Esther eventually wrote a book about keeping secrets entitled “Hidden: Why Secrets Hold You Back and Launch You Forward” (it is published under her birth name Kris Loewen). (I write here about myself in the past using girl/woman even though I was presenting as boy/man very intentionally. I believe that even though everyone in my life considered my male sex to dictate my gender…and even though I went along with those expectations…they were in fact wrong. It is much more helpful for me to conceptualize all of my life as the woman that I am, better framing the reasons for my distress in the body and roles I’ve landed in.)

At age 39 after 16 years of marriage while keeping her secret under wraps (and after 15 years as a Christian pastor) she came out and began living her truth. It was the most courageous thing she’s ever done — and among the most beautiful. Esther’s wife never wavered in her commitment to her life partner and the marriage they had built, and neither did Esther. They both continue to parent their two children ages 7 and 10, who are coping and adapting normally to the change in their household. Esther’s community of faith have provided a mixed response thus far, giving both a great deal of silence and also enthusiastic celebration to her sharing the news about her gender transition.

In the wake of her unwanted resignation from pastoral ministry related to revealing her transgender identity, Esther is now studying full-time at the California School of Professional Psychology at Alliant University to become a Couple’s and Family Therapist in the next half of life. Esther remains deeply spiritual and retains the identity of pastor, even if her theology has grown beyond the bounds typically allowed by her religious tradition of youth. In the future, she hopes to continue pursuing her life calling of creating inclusion for all people — that everyone might find a seat at the table of life. She hopes to accomplish this by continuing to teach the truth in a world that would rather have easy answers, bless unconditionally with love that could only be infused by the Divine, and challenge cruelty and abuse as she finds the courage to do so.

Hidden: Why Secrets Hold You Back and Launch You Forward – written by Kris Loewen; edited by Esther Loewen